Before we were able to enjoy what Battambang had to offer we first had to make the big 18-hour journey from Koh Rong Sanloem to Battambang (23rd of Jan). Now, this would have been pretty bad when feeling healthy but seeing as at 6 am that morning I was awake throwing my guts up its safe to say I really wasn’t looking forward to it. First, we had to get a ferry back to the mainland which departed at 10 am and involved a long 15-minute walk down the beach to the dock. Thankfully Fred and Con were very kind in offering to carry my main bag, so I was able to trudge my way down the beach to the dock feeling very sorry for myself. Just before reaching the dock I also threw up again! Maybe the Sprite hadn’t been the best idea. Thankfully though it meant I did feel a bit better and was able to navigate the hour-long ferry ride, on very rough seas without having to run to the back of the boat. When we got onto the ferry we were once again reunited with Ollie who had been on Koh Rong for a few days on his own. Unfortunately, our ferry was quite significantly delayed so it meant we had missed our bus waiting for us on the mainland to take us to Phnom Penh, where we were transferring again. We therefore rebooked a minivan and got into this ready to make the journey to Phnom Penh as originally scheduled. Unfortunately, the minivan was terrible, initially, we kept driving up and down the same road for an hour waiting to pick up more people until the minivan was full. Once it was finally full we set off on our way on a journey which ended up taking 7 hours. Luckily, I was able to keep my bowel movement in check during the 7-hour journey but must admit had a few scares and was very thankful at every toilet stop we arrived at. Once we got into Phnom Penh the traffic was terrible and we crawled very slowly through the tail lights for about an hour which was very painful. Adding to the pain was an American man in the minivan who became very impatient and irritating at the traffic and kept nagging the driver about stuff. Given my mood, I was very close to telling him to shut the hell up! Luckily the traffic cleared a little before I got to that point. When we arrived in Phnom Penh at around 7.30 pm we then had to catch another bus to Battambang which left at 8.30 pm. Thankfully this bus was far comfier than the minivan of the previous leg of the trip. We were travelling on a “hotel bus” which meant we had little double beds to lay down on while travelling. Now they were far from spacious when shared between two people, but they did mean we all got an okay night’s sleep until around 3 am when we were woken up to say we had arrived in Battambang. We did, however, get dropped off in the middle of nowhere but as always, a Tuk Tuk was waiting to take us to our hotel where the kind owner had waited up (slept in the lobby) waiting for us to arrive. We got into our rooms at around 4 am in the morning and passed out until late the next day. 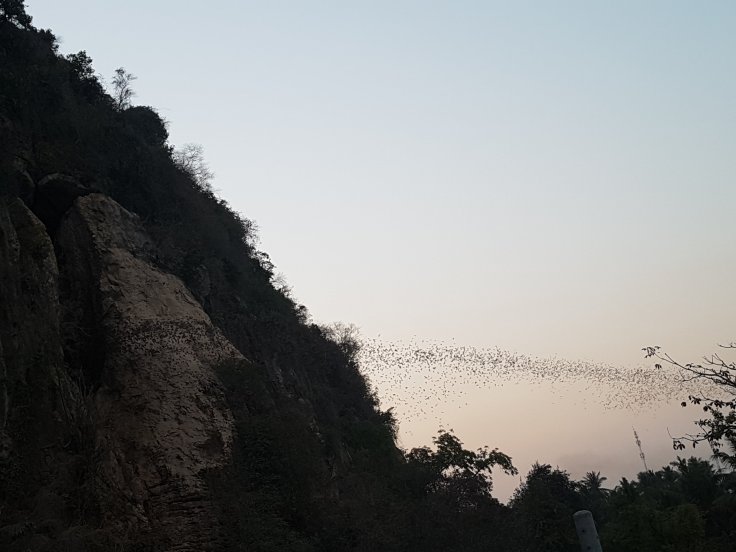 Having finally arrived in Battambang after one of the most miserable journeys of my life we had a couple of nights here. On the first evening, we headed to the Bat Caves just outside the city we arrived early around 4.30 pm and had to wait until around 6 pm for the bats to show themselves. Basically, there was a big hole in the side of this mountain where supposedly around 1 million bats live. There are loads of little bars situated outside the cave for all the tourists who show up every night to see the spectacle of the bat leaving their roost to feed. At around 6 pm we started to hear the intense squeaking of the bats as they woke up until finally, the constant stream of bats erupted from the cave like a swarm of bees from a hive. The sheer number of bats was incredible, and the stream went on for at least 30 minutes. There were so many bats that we left before they had even all finished leaving the cave. In addition to this, the bats that had left towards the start had started to return before all the bats had even left the cave, somehow they managed to pass by each other without any problems. Hopefully, that gives you some kind of indication of how many bats left the cave. It really did feel like we were sat in a live episode of planet earth and I was just awaiting a voice over from Sir David Attenborough to complete the experience.

The following day we had a bus booked mid-afternoon to take us to Siem Reap, however, in the morning, we managed to fit in a quick ride on the bamboo train. This consists of a 7km track that runs in a straight line. You completed the 7km stop and turn back around to come back to your original starting point. Basically, it’s just a big tourist attraction and I think in the past it has now changed location to where it previously was. Still, it was a fun way to ride through the Cambodian countryside on the little bamboo made platform that sits on two sets of wheels powered by an old motor. The issue arises when trains are coming the opposite way on the single track, meaning someone must dismount from there train and lift it off the track to allow the others to pass. This seemed to be determined by however many trains were in the convoy, with the most trains taking precedent and progressing on the track. If you’re at the end of the train convoy you then also must stop and help put the train back onto the tracks. At the halfway stopping point, there are also loads of children trying to sell you stuff and their English was excellent. They were also very cheeky salespeople and due to Fred losing odds on he had to purchase a vest from the children. We also purchased some refreshments too as the children were very amusing. I did ask if they had school and they told me in the afternoon, so I hope this was the case and they aren’t forced to work here as opposed to missing out on an education. 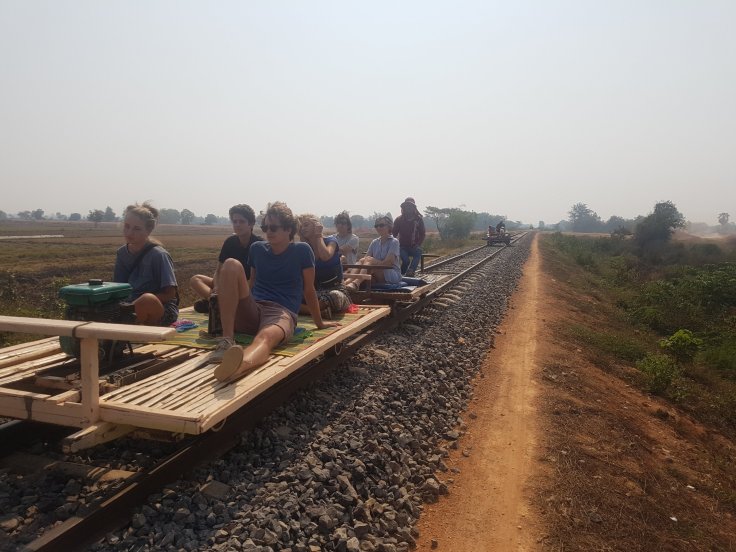 That afternoon we made our way to Siem Reap, the bus journey wasn’t too bad, and I managed to survive without any incidents as I was still feeling the effects of food poisoning. The same couldn’t be said for that night as once again I was up most of the night being sick and on the toilet. At least I wasn’t on a bus. The boys had gone out for a few drinks down the famous pub street in the city which is pretty self-explanatory from the name. They said that had a good time out and I did later experience pub street for myself in the day when it was far less lively and subdued. Shame I didn’t get to see it of an evening, but such is life. Also, unfortunately for me, while the boys were out one night, and I was resting in bed I had the pleasure of listening to a man skype who I presume was his girlfriend. Now the conversation they had turned very raunchy and I had the pleasure of lying there listening to the man explaining how he couldn’t wait to see her and what he planned on doing when he did. Almost made me sick again just listening to it. Not sure that he understood although there were curtains to give some privacy around the bunk beds, they very much weren’t soundproof and I heard far more than I wanted to that evening.

Come the last few evenings in Siem Reap I was finally starting to feel more like myself. The boys decided they fancied Indian which for me recovering from food poisoning was hell! All I wanted to do was eat the Indian food which smelt so could, but I took the sensible route and stuck to my plain rice and naan. (My diet for the last few days had consisted solely of rice and bread) so sitting in the restaurant was anguish that I didn’t need, although it was probably best I didn’t do the stupid thing and order a curry.

On our final day in the city, we planned to visit the Angkor Wat temple complex for sunrise. We had hired a Tuk Tuk for the day who picked us up at 5.15 am and drove us to collect our tickets, which weren’t cheap, setting us back $38 dollars each. Then made our way onto the main Angkor Wat sight to catch the sunrise. As expected there were many tourists, but it was still quite the sightseeing the sun come up over the massive temple structure. After sunrise we stopped for a bite of breakfast where we ate pancake, we resembled more closely the base of a Victoria sponge cake due to there thickness. After this, we walked around the main Angkor Wat temple. Before jumping back on the Tuk Tuk to travel to a different sight but close to the main sunrise attraction where many more temples are situated. We probably visited close to around 6-8 other ruin temple sights which all had the own unique charm and characteristics. Even visiting one temple which was used as a set to some of the Lara Croft films. The temples were very impressive, and one can only imagine what they must have looked like in their prime let alone how they were even constructed, but for all their charm, you can only walk around ruined temples for so long. Therefore, come mid-day we had all but had enough and headed back to our hostel to chill out for the rest of the day, playing pool and stuff.

The following day we were up early (now the 29th of Jan) for a flight from Siem Reap to Phuket. From Phuket, we are now spending the next month exploring the Thai islands seeing as we didn’t come down this way when first in Thailand, opting to explore the northern mainland instead. Also, in Phuket, we shall be joined by Chris who moved to Australia from Tiptree just under a year ago. He will be spending around 10 days or so travelling with us around the islands before heading back to Aus.  In the next blog, I shall detail our first week of travel in the islands.