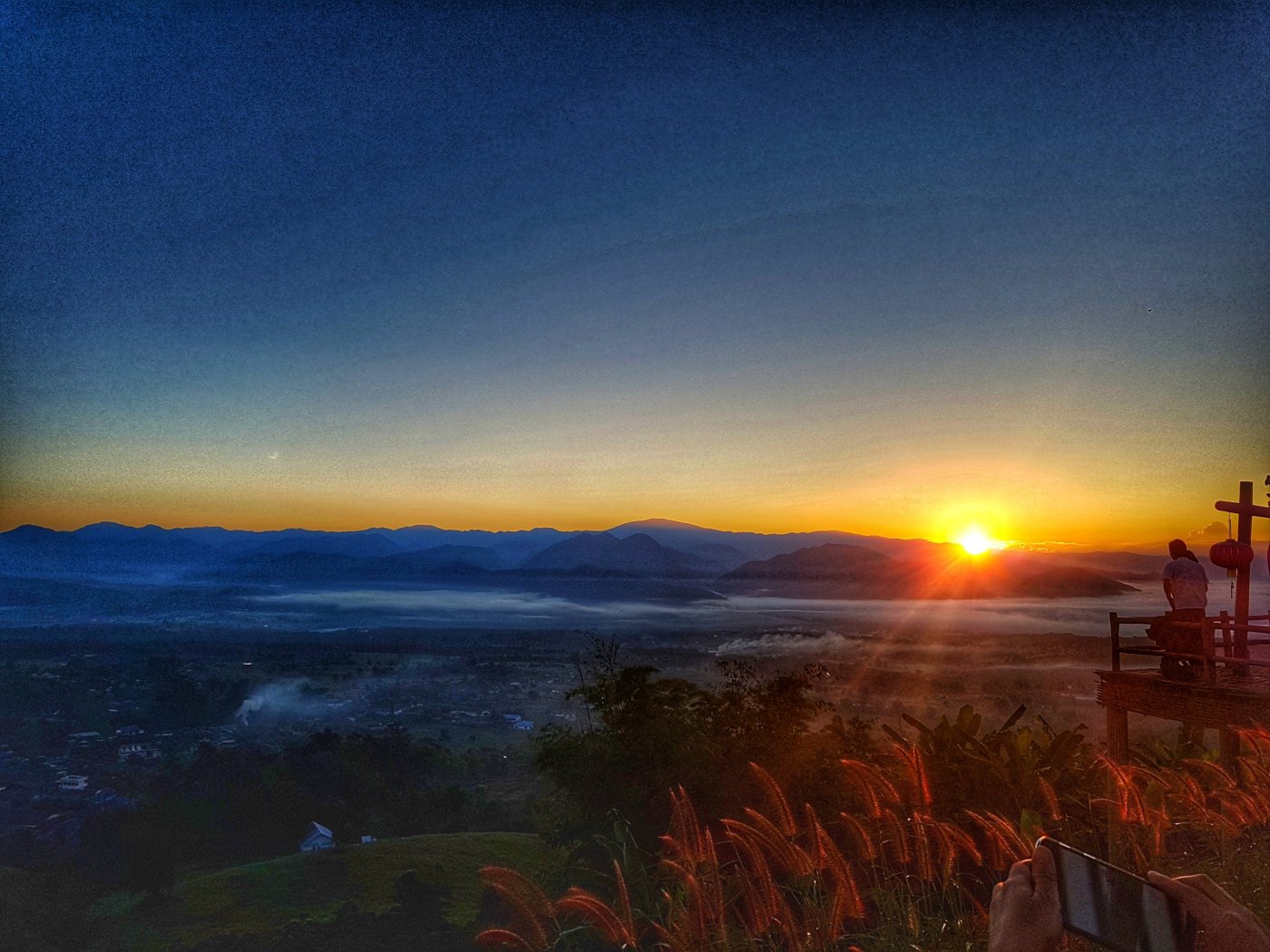 When we arrived in Pai we made our way to the hostel. The hostel itself was owned by the same people who ran the one we stayed at while in Chiang Mai, so we got a free night’s stay. Originally, we planned to stay in Pai for 3 nights but ended up staying for 4 because we enjoyed the place so much. The hostel itself was great, with amazing views over the rice fields and of the mountains behind. You could just sit and chill out all day if you wanted. However, getting around was not so easy in Pai and the hostel itself was a 5-minute drive from the centre of town. This problem was easily navigated by hiring mopeds again for the duration of our stay. Once again these were really cheap at 100 baht each per day (£2) and once the tank was filled another, 100 baht, we were ready to go. This time we decided to get one ped each as we knew we wanted to do a lot of exploring. That evening we set off on the peds to the Pai Canyon to catch the sunset. When we arrived at the canyon we climbed and explored a little way into the canyon to get the best view of the sunset. Once again, the views were amazing, and it was a great place to watch the sun go down behind the mountains. Amazing views and scenery were very much a feature in and around Pai.

After the sunset, we went into town to get some food, there was a great street food market which we ate at most nights that had unbelievably good food for such cheap prices. We also stumbled across the final night of the Lay Krathong festival that was also being celebrated in Pai. There was a large parade and even fireworks and lanterns. The fireworks were very much unregulated, and everyone was just letting them off next to one another (health and safety is a bit more relaxed in Thailand if you hadn’t guessed). After the parade and food, we went back to the hostel for a supposedly quite night ready to wake up at 5.30 am to catch the sunrise. I stayed in the room sorting stuff out on my laptop and wrote my blog, the next thing I know the boys have come in and said they were going out, I declined the offer intent on making the sunrise plus I still had stuff I was sorting on my laptop. Come 2 am the boy rock in after a night out in Pai and I decided at this point to turn off my alarm for 5.30 knowing full well I would have been going on my own to the sunrise so thought I’d rather get some sleep instead.

Morning broke and me being fresh headed out for a little ride on the peds on my own to the white Buddha which overlooks Pai while the guys struggled out of bed. The journey was short and the views good of Pai, but there are far better thing to be done in and around Pai if short on time. By the time I got back the boys had surfaced and were ready for the day ahead. At this point, I was also given the “Gary Bracelet”. Basically, the Gary bracelet was brought to denote who was currently the most boring person on the trip and due to the fact, I hadn’t gone out but also didn’t make the sunrise this constituted me becoming the “Gary” of the group after Connor had held the title for a little while. The reason for the Gary name came from me being Gari Baldi when all my hair was gone. Right after that little side note on the whole Gary situation, we set off on the peds to explore two waterfalls around Pai. The first waterfall didn’t look that impressive on first inspection but that’s because we hadn’t fully walked all the way to the waterfall itself. Once there it was great. We took a little swim in the water to cool off after the scooter ride. We then chose to venture on further down the road to a place called the bamboo bridge but on arrival decided it wasn’t worth the money so just had some food before making our way to the second waterfall. This one was larger and probably more impressive but also more crowded which detracted from the appeal. However, it was still great to explore all the different levels of the waterfall, we even had to tightrope up a fallen log to reach the final part of the waterfall. There were also Thai children slipping and sliding down different part of the waterfall which looked absolutely crazy to us but they all took it in their stride, safe to say none of us followed although I did swim in one of the waterfall pools. Another bonus to this particular waterfall was the drive up through the village and countryside to reach it, the views were once again spectacular and great fun on the mopeds.

That night we did, in fact, all have a quite night ready for the sunrise the following morning, this time me Ollie and Fred awoke at 5.30 to make the 20-minute ride to the Chinese Village viewpoint just outside Pai, Connor, on the other hand, stayed in bed. It was pitch black on the ride to the viewpoint and also bloody freezing. In the day the temperature in Pai was great but at night it dropped considerably due to being in the mountains and at some altitude. We got to the viewpoint ordered some tea which came with a lovely Chinese sticky bun and sat watching the sunrise over Pai. The views were once again amazing, and no superlatives will do it justice with the sun rising over the mountains and the mist in the valley, nor will any photos (the same can be said for all the amazing views so you’ll just have to take my word for it). When back from sunrise the boys all stayed in bed while I edited my time-lapse video of the sunrise. Ollie awoke from his nap a little grumpy but once we were ready around mid-day we set off on a drive to the Lod Caves.

Now we had heard that the Lod Caves weren’t all that impressive but the drive there, on the other hand, was meant to be amazing. It certainly lived up to the hype. The drive was around 1 hour 15 minutes over a mountain range then through a village. The views on the drive were exceptional and the drive itself amazing with sweeping bends sometimes 180 ° back on themselves. It felt like I was in an episode of top gear where they drive a car down some amazing road, however, we were doing it on the back of 100 cc mopeds, but it was still unbelievable. The viewpoint at the top of the mountains range was equally stunning. Here we tried to work the 4-person swing which sounds crazy and is. Basically, its 4 swings that are in a Ferris wheel configuration and all 4 people swing at the same time while spinning around on the Ferris wheel. Ultimately, we didn’t get it to work and when everyone jumped off but me I was nearly sent flying but luckily managed to hand on. After the stop, we continued to the caves. When we were around 5 minutes away from the caves themselves, Freddie blew a tire. Thankfully we were travelling slowly at this point and he managed to control the bike and not fall off. Also, luckily, we had just travelled through a small village so left Freddie’s bike where it was on the side of the road and headed into town to find a mechanic. After about 3 stops at different restaurants and explaining in sign language we need a garage we got to where everyone had been directing us. At the garage, the man got in his truck while we rode ahead to direct him to Fred’s bike. He picked up the bike and drove back to his shop whereby he changed the tire while we had lunch in a restaurant next door. After around 10 minutes work Fred’s bike was good as new all at the cost of 120 Baht (£3) for call out pick up and tire change, unbelievable. By this point we were ready to drive back so didn’t even make the caves, but as I said we didn’t go for the caves but rather the drive and it really was something else.

After the long days drive we then headed out for a night on the town (this is now Sunday night the 25th of November). There was a big party going on at a place called paradise just down the road. Now Pai is very much a place that attracts a lot of hippies, so the party was very much full of them. There was even fire dancing which I thought was cool but overall the vibe of the place wasn’t really what we are into although everyone there was friendly and having a good time. Due to this we headed into Pai itself where it was more our scene with bars and stuff (not so much peace and love) and partied the night away. I also covered my face in luminous paint (had to go a little hippy I suppose). The following day we had earmarked to do nothing and just chill around the hostel enjoy the atmosphere and the view and that’s exactly what we did. 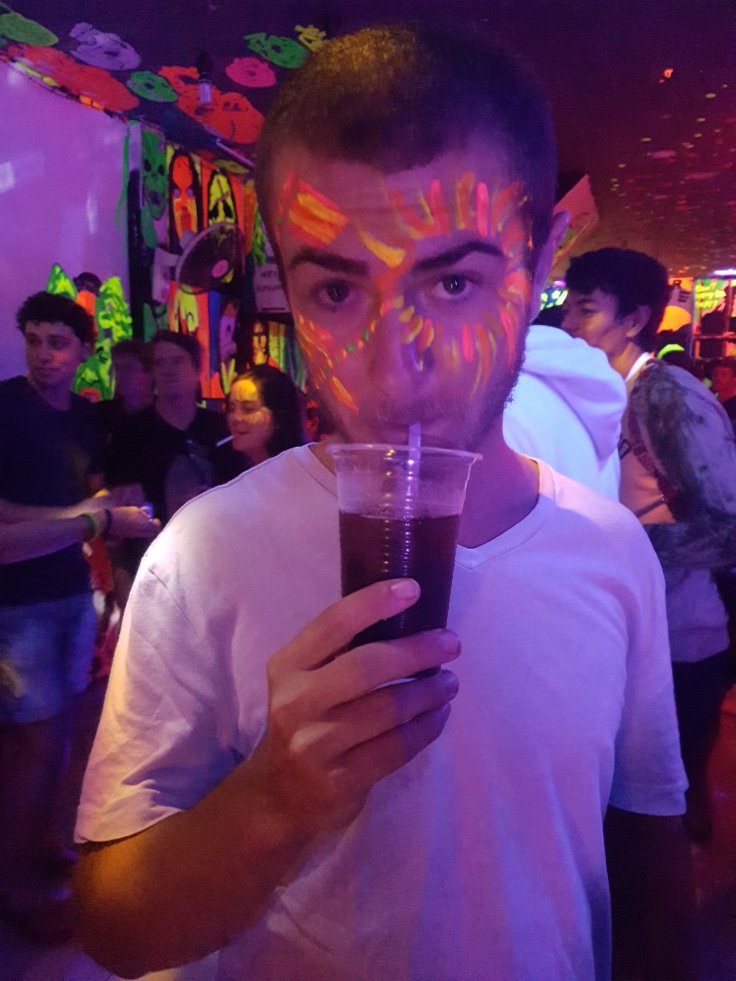 Tuesday morning 27th (so today) we left Pai to travel to Chiang Rai. The journey was split in two as there is no direct route, so we travelled back to Chiang Mai first before we then intended to book a bus to Chiang Rai. Unfortunately, when we arrived in Chiang Mai all the buses to Chiang Rai were fully booked so we shall now be leaving for Chiang Rai bright and early tomorrow morning. We had to stay back in the hostel we originally stayed in, in Chiang Mai and spent the day chilling. Next time I will update about Chiang Rai before we embark on a 2-day slow boat into Laos. However, the next blog may be a few days away due to not having much internet while travelling down the Mekong River on a slow boat in Laos. So, until then I guess.