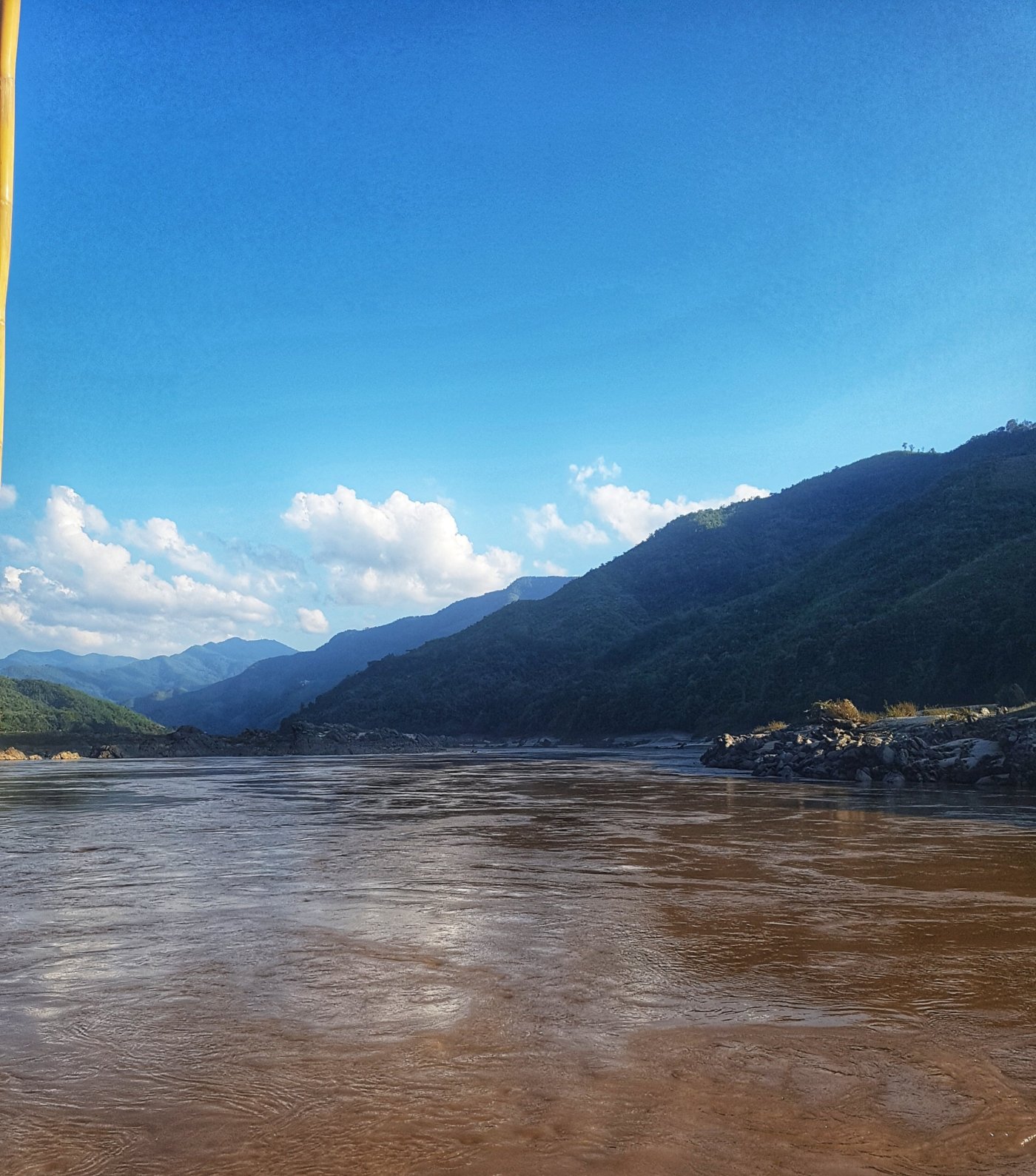 We awoke at 5.30 am on Friday the 30th of November ready for the two-day journey from Chiang Rai Thailand to Luang Prabang in Laos. You can choose to do all the journey in separate legs booking it all yourself, but we decided to book through a tour operator saving us all the hassle. Plus, for around £35 with the tour operator, the money we may have saved didn’t seem worth it. Although this is often referred to as the slow boat into Laos you don’t actually get on the boat until you are in Laos itself. Therefore, the first part of the journey consisted of the 4 of us cramped into a little Nissan Micra travelling from Chiang Rai to a border town in Thailand. The drive itself was pretty cool seeing as the sun was coming up over the mountains and rice fields. Once we arrived here we met up with a minivan carrying more people also getting on the slow boat. The driver of that minivan was quite the character, we nicknamed him the Thai cowboy due to his appearance, even had his phone strapped to his belt. He was initially very helpful getting everyone ready for the border crossing by helping to sort out people’s departure cards and stuff, but after going through everyone’s about 20 times and repeating himself just as much he did get a little annoying. Once he was satisfied that we could all cross the border (I mean it’s not like we haven’t done it before) we left the little town pit stop 5 minutes out from the crossing itself. Once there we departed Thailand, then waited for a bus to take us over the friendship bridge across the Mekong River to the Laos border. Here we had to hand in some paperwork and our passport, plus pay the $35 visa fee and obtained our Laos visa, a nice little addition to my passport. Once we had our visa, which didn’t take any time at all other than waiting in the queue of people we officially passed into Laos itself. Once here there were people from the tour company waiting for us to pick us up from the border and drive us to the town where the slow boat departs from, called Huay Xai. We stopped in the town to pick up some beer, water and food for the boat ride. Once everyone had stocked up, we were then transported to the boat itself. Here we were supposed to have a designated seat, but no one paid any attention to that. Luckily there were still quite a few seats available toward the back of the boat and once everyone was on we did have a reasonable amount of room. 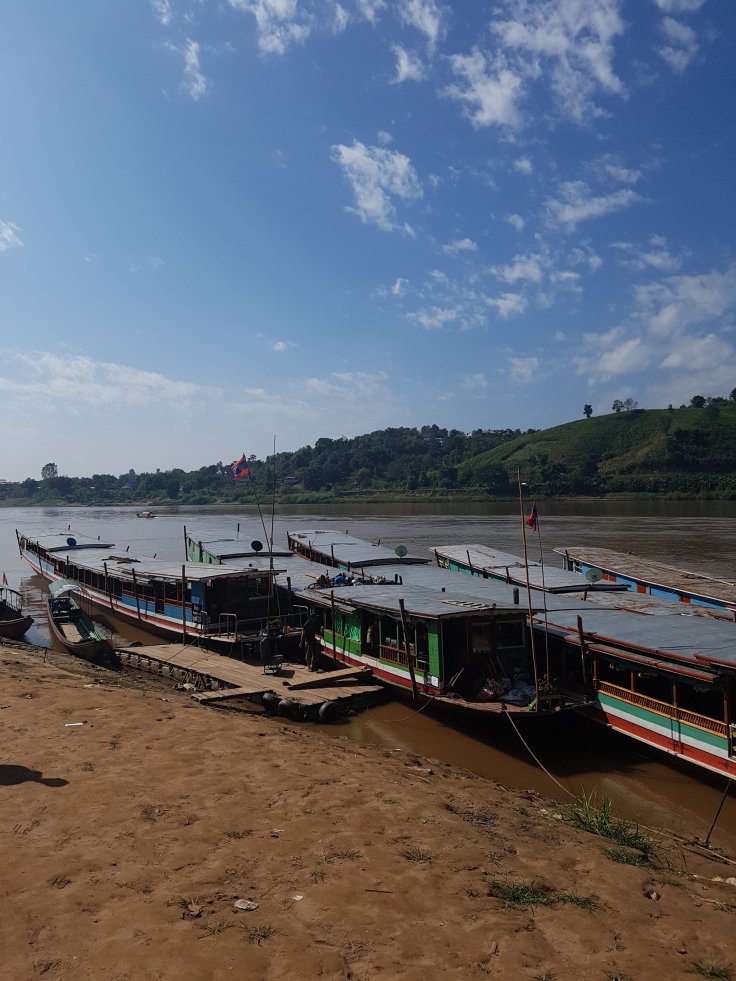 The boat itself was quite a sight. The seats seemed to have been taken from old cars and vans and just placed on the deck of the boat. They weren’t even fixed in place meaning you could slide them around if you wished. There were also several toilets on the boat, but the condition of these quickly deteriorated, thankful I’m a man and didn’t have to sit down. Additionally, the noise from the engine was rather loud toward the back of the boat. Now, this probably sounds like I’m really not selling the boat but, in all honesty, it really wasn’t as bad as it sounds. The boat finally set off around 11.30 am to make the 6 / 7-hour journey to our overnight stop in Pak Beng. The boat ride, however, was amazing, the stunning scenery down the Mekong river was incredible. The boat driver also must have been pretty skilled as the water was littered with rocks which were all skilfully navigated. It was easy to sit looking out the open-sided boat for hours letting time slip away. We had a few beers as well as sandwiches for lunch and enjoyed the day floating down the river. Initially, it was cool to think one side of the river bank was Laos and the opposite side Thailand still. Eventually, we turned a corner of the river whereby both sides then became Laos. 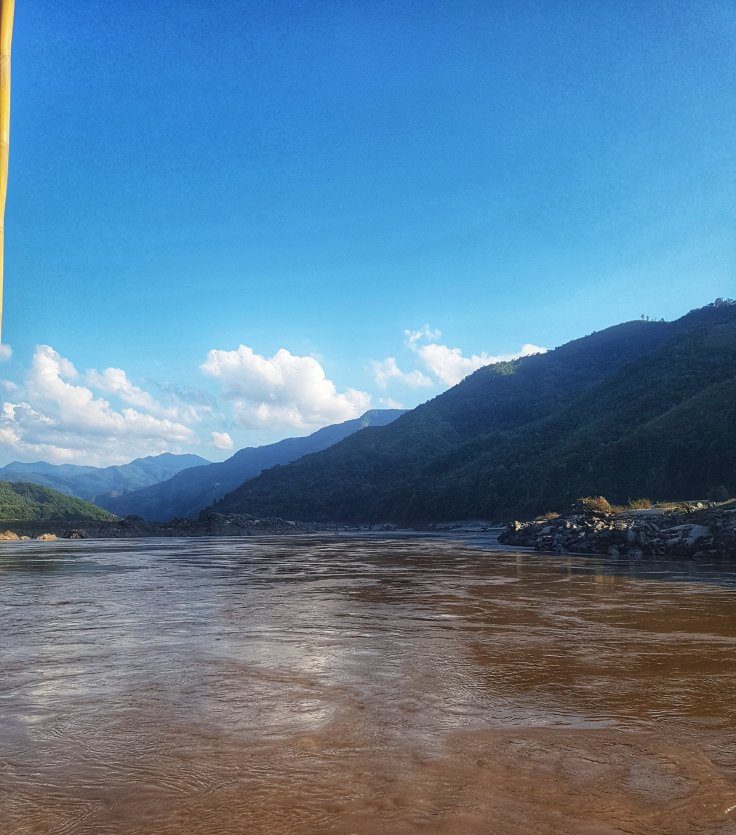 At around 5.30 pm we arrived in Pak Beng, where we would spend the night. On arrival, it was a little chaotic with many locals offering the boat’s passengers places to lay their heads for the night. In addition to this everyone was trying to get their luggage off and out of the boat via the little floating pontoon in the dark, also quite the mission. Eventually, we gathered our bags and selected a place to stay. For the night’s stay, it cost us 20,000 kip around £2 (adapting to the new currency is a bit of a pain) however the room was basic as you would expect for that price. But all we needed was a place to sleep and put our bags. Once we’d dropped off our bags we headed down to get some food from the guesthouse restaurant where we all had fried chicken or pork and rice, or should I say find rice as it was spelt in the menu. Despite the spelling error, the meal was amazing (although we were all starving which probably made it taste better). Once dinner had been eaten we headed to the bar just below the guest house called happy bar. I mean before we even got to the bar Ollie and Connor were smashed from drinking on the boat. The bar was a nice little place overlooking the river, there was a beer pong area and pool table, also we received some free shots and cocktails too. We partied the night away and met fellow travellers also taking the slow boat. After a little while, we decided to move to another bar but quickly regretted this decision so returned to Happy Bar. However, in the other bar which was called Hive and was the opposite end of the village, I was served a drink by a boy no older than 12, which was a rather odd experience. Still, he made a good rum and coke. When we got back to Happy Bar the bangers were blasting out, so we quickly jumped up on the tables and belted them out at the top of our lungs. When the bar closed we were once again hungry so headed out into the town. Unfortunately, but in the end fortunately everywhere was shut, however due to such little light pollution as we were so remote the night sky looked incredible. We, therefore, laid in the road (don’t worry only 2 mopeds past us in the whole hour) looking up at the night sky, it was unbelievable, and we saw several shooting stars. We laid there playing music and singing along and to be honest it was so nice just the 4 of us laid there enjoying the moment. After stargazing for the hour, we retired to bed, ready to get up at 7 am to start the second day’s boat travel.

It was a bit of a struggle getting up in the morning but once we had some breakfast inside us along with some supplies for the boat journey we headed back down to the boats around 8 am. Ready for departure around 9 am. We found some nice seats but due to people being tired and hungover on the second days morning there were a few disputes. Initially, some lady in front of us pissed off two ladies by moving their seats or asking them to move them (the problem with seats not fixed to the floor) then some guy decided he wanted to piss me off as well. He was complaining that the seat he had chosen which was directly in front of mine had very little leg room, so he wanted me to move my seat back. I countered by saying well if I move back then the people behind me have no leg room and this will continue to happen, so I refused. He subsequently moved his seat anyway leaving me with practically no leg room at all, so much so I laid sideways across both seats as opposed to facing forward. However, I reluctantly didn’t move mine back out of the principle I stated before. It also didn’t help that people further up had turned seats to face one another which worsened the situation regarding space as it was a much less productive use of the boat’s deck. Still, it wasn’t too much of a problem as I was free to walk around the boat, plus if that’s the biggest problem in my life right now I’m very content with that. The seconds day’s journey was equally stunning but a little more subdued. We have only been drinking water today, but there have been a few party animals at the back of the boat, a group of lads from Leeds who can’t half drink. Furthermore, we were situated closer to the front and further away from the boat engine, so the ride was a bit more peaceful even if a little more cramped. 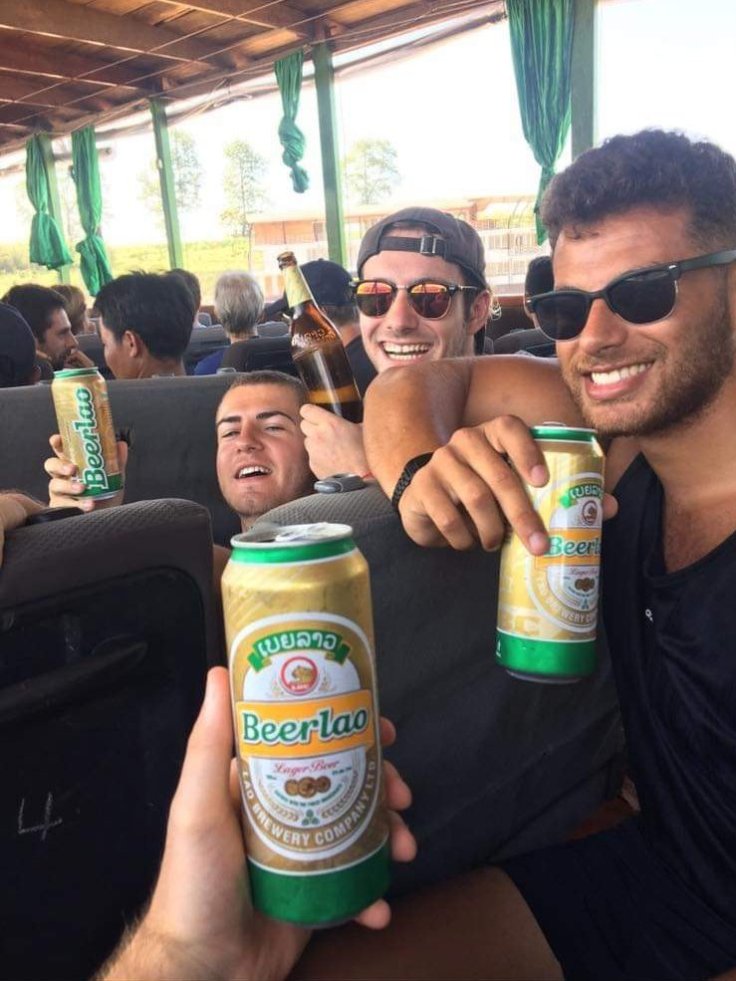 After another 8-hour ride on the boat, we finally reached our destination of Luang Prabang. Word of warning though the boat doesn’t dock in the city but rather a 20-minute Tuk Tuk ride to the centre. Once again there was the same chaos getting bags off the boat via a little pontoon. Plus, the Tuk Tuk company has a monopoly on the price so you can’t barter, therefore we paid 20,000 kip each £2 to get from where the boat docked to the city. They cram the Tuk TuK full of people, I honestly don’t know how the Tuk Tuk was still functioning (it almost didn’t start) and then everyone gets dropped at the night market in the centre of town so must make their own way from here to their accommodation. Luckily for us, our hostel was only 10 minutes walk away, so we didn’t have to pay out more money to Tuk Tuk drivers to get there.

Overall the slow boat was a good and unique experience and I’m glad we did it. The views of Laos from the boat more than made up for some of the annoying aspects of the journey. Plus, we also met and got chatting to some lovely people on the boat from places far and wide (Brazil, Portugal, Germany). For those who have the time and the capacity to want to do the slow boat I highly recommend it as it’s a cool experience. Besides the bus ride would have been about 20 hours anyway so why not travel in this unique way. We are now looking forward to what Laos has to offer and I will update you about what we get up to in Luang Prabang once we leave.