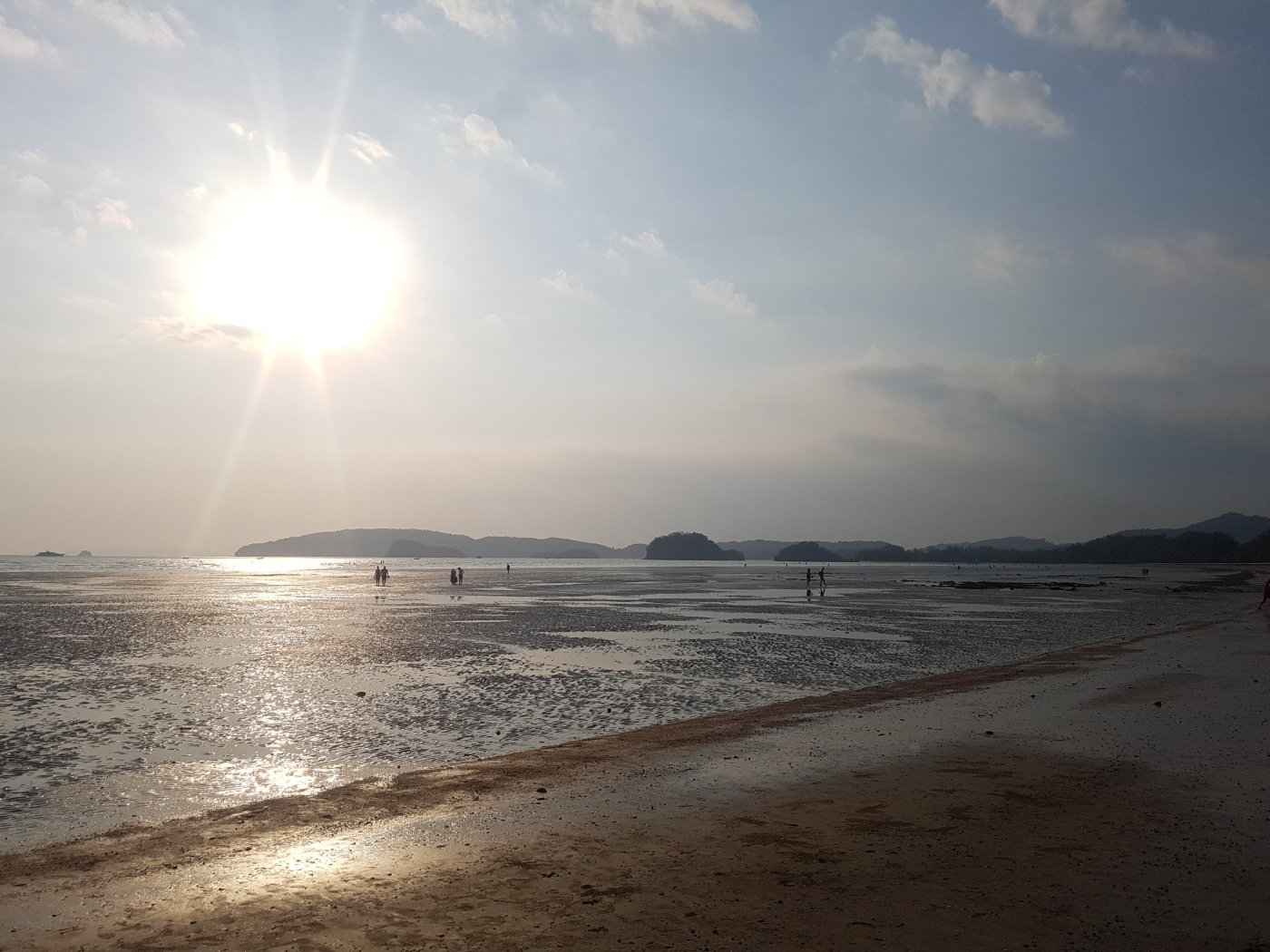 After Koh Lanta, we made our way to Krabi which was a 4-hour minivan ride away. Krabi, however, is more specifically the region and we stayed at a place called Ao Nang beach, just around the bay from the popular Railay beach. Our first night in Ao Nang was Chris’s last night so we all headed out for some drinks to give him a send-off. We actually tagged along on a bar crawl set up by one of the party hostels in the town. On the bar crawl, we met up with a girl we met way back when we started in Singapore hence why we knew about the pub crawl in the first place. We jumped from bar to bar and had an enjoyable last night with Chris. (enjoyable until I ended up paying £12 in burger king at the end of the night) Was a decent burger though, but not sure it was worth £12. Morning rolled around, and it was time for Chris to leave, now our goodbyes weren’t all that great as we were all still in bed when Chris left, so sorry for the bad send off in the morning haha! But overall it was great to have Chris tag along with us for 10 days or so as it brought a nice little change to the group dynamic and someone new to talk to! Unfortunately for Chris, his journey home wasn’t so straight forward as he had accidentally booked his return flight for the 7th of March and not the 7th of Feb. £200 and 12 hours later than planned Chris arrived back in Sydney. The day Chris left we all chilled in the hostel and really didn’t do a lot. 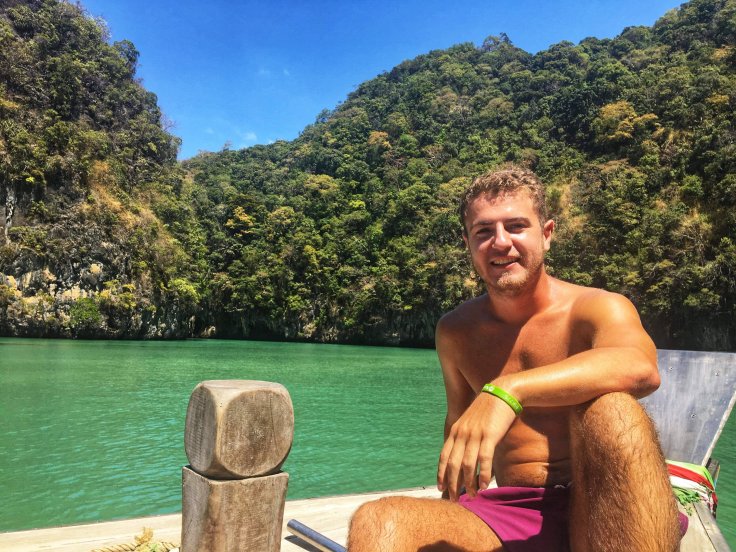 The following day however we booked a tour to visit Ko Hong Island. The tour included a snorkel stop, a stop for lunch on a nearby island to Ko Hong, before heading to Ko Hong island itself. Now the island was very beautiful but once again during the whole tour everywhere was very crowded with many tourists doing similar tours. Don’t get me wrong the scenery was lovely. But the number of people does detract from the charm a little. Additionally, I noticed while snorkelling that the boats dropped anchors as opposed to using mooring lines which meant one of the anchors was caught on a part of the reef. I can imagine this happens almost every day so unfortunately, it seems the tour companies don’t seem too concerned about the welfare of the aquatic life. Overall the tour was a good way to spend the day and we had fun zipping around on the boat.

The following day (9th Feb) we left Ao Nang and headed onto the mainland for a few days, our destination Khao Suk, which is a national park in the south of Thailand. The bus journey from Ao Nang to Khao Suk was rather bad, firstly about 13 of us were all crammed into a tuk tuk type thing and driven toward Krabi town itself. Then we were dropped here at the bus company and had to wait like an hour and a half before we all got on the bus that would eventually take us to Khao Suk. The bus was also roasting hot but luckily, I had two seats to myself. That night in Khao Suk Fred an I ate at an Italian restaurant across the road from our hostel, we would end up eating there most days hereafter as it was so good. Also, that first night Manchester United were playing at a reasonable time, normally the games are in the middle of the night due to the time difference but this one worked out well, so we found a bar and sat and watched the game. The following day we then went for a trek through the national park itself. We left around Mid-day and returned to our hostel at about 5 pm so it was a good walk. 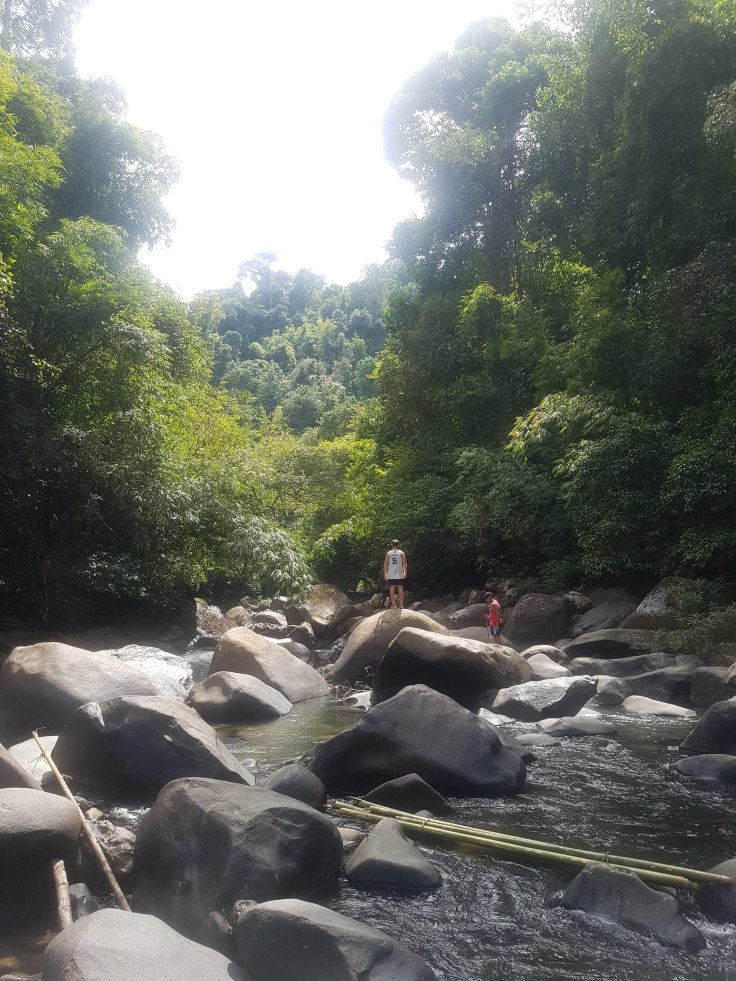 The first half was along a rather nice dirt path that had different points of interest along the way such as waterfalls and wildlife such as monkeys. At one point we stopped and saw a group of monkeys up in the trees that another group of people lead by a tour guide were also looking at. Here Ollie lets out a fart to which we all turn and look at him, along with the other tour group before he then turns around and looks behind him. It was obvious to all of us and the other group’s tour guide that it was Ollie who let one rip, but the tour guide says “ow a frog” to cover for Ollie at which point a lady in his group was like “ow really I thought someone had farted”. We all managed to keep it together until we passed them further before bursting out in fits of laughter. Who knew Ollie’s wind could be mistaken for a frog. After that little incident, we continued our trek and the going got a little tougher the dirt path gave way to harsher terrain and many different possible routes. We successfully navigated our way into the dense jungle and were once again greeted with more monkeys and waterfalls. After a good few hours walking and exploring we turned around and headed back to the hostel.

That night once again football was on this time Spurs who Fred supports so we headed back to the same bar to once again enjoy the football. I also stayed up and streamed the England 6 nations game until around midnight too. The following day we had another relaxing day, not really doing a lot but Fred and I did manage to get a bit of a workout done on the terrace of our hostel room! Once again, we would eat Italian to treat ourselves after the workout!

Come the 12th of Feb we were once again heading back to Island life this time in the Gulf of Thailand. We had an early morning start to take us to Koh Tao. The journey was long leaving at 6 am and arriving on the island at around 2.30 pm. The weather on the way also wasn’t that great with it starting to rain just as we boarded our first ferry. In addition to this, the seas were all a little rough in places we some people becoming a little seasick. The crew are very prepared for this though handing out bags to those who need it. Fortunately, none of us experienced any sickness. Once we had landed on Koh Tao. The first afternoon was spent not doing a lot. That evening however we found a mini-golf course and had a round between the four of us. This was really good fun and Fred came out the eventual winner. I won’t shame the person who was last though (it was Connor). The main reason for me visiting Koh Tao though is I wanted to complete my PADI Open Water Scuba diving course. The island is world famous for being one of the best places to do so. The course, however, didn’t start until the 14th of Feb, so I spent the 13th with the boys exploring the island. I will explain all about the diving in the next blog. On the 13th we hired some bikes and done a little exploring. First, we headed to a beach which was home to a large rock you were able to jump off into the sea. The waves were a little rough though so none of us decided to give it ago. After chilling out on the beach for a while we then made our way to a viewpoint up in the hills of the island. Here we had a beer an admired the view. We were also invited to join two Thai ladies. I say ladies one was definitely a man! But we sat and chatted with them a while before leaving as quickly as we could. We had then planned to go snorkelling at shark point. In the hopes of obviously seeing some sharks. But once again the sea proved too rough and the visibility looked very poor so gave it a miss. Instead, we headed back to the mini golf place, but this time opted to play football pool. Basically, a game of pool but using footballs and your feet. We were all terrible, but the ranking reversed with Con taking the overall first place beating me in the final and Fred losing to Ollie in the Losers match.

Overall our second week in the Thai islands was a little tamer than the first and really, we didn’t get up to too much. Apologies for the delay in writing of this blog but I have been busy scuba diving on Koh Tao from the 14th till the 19th! It was amazing, and I shall talk all about it in the next blog, which hopefully doesn’t take me as long to write and publish.