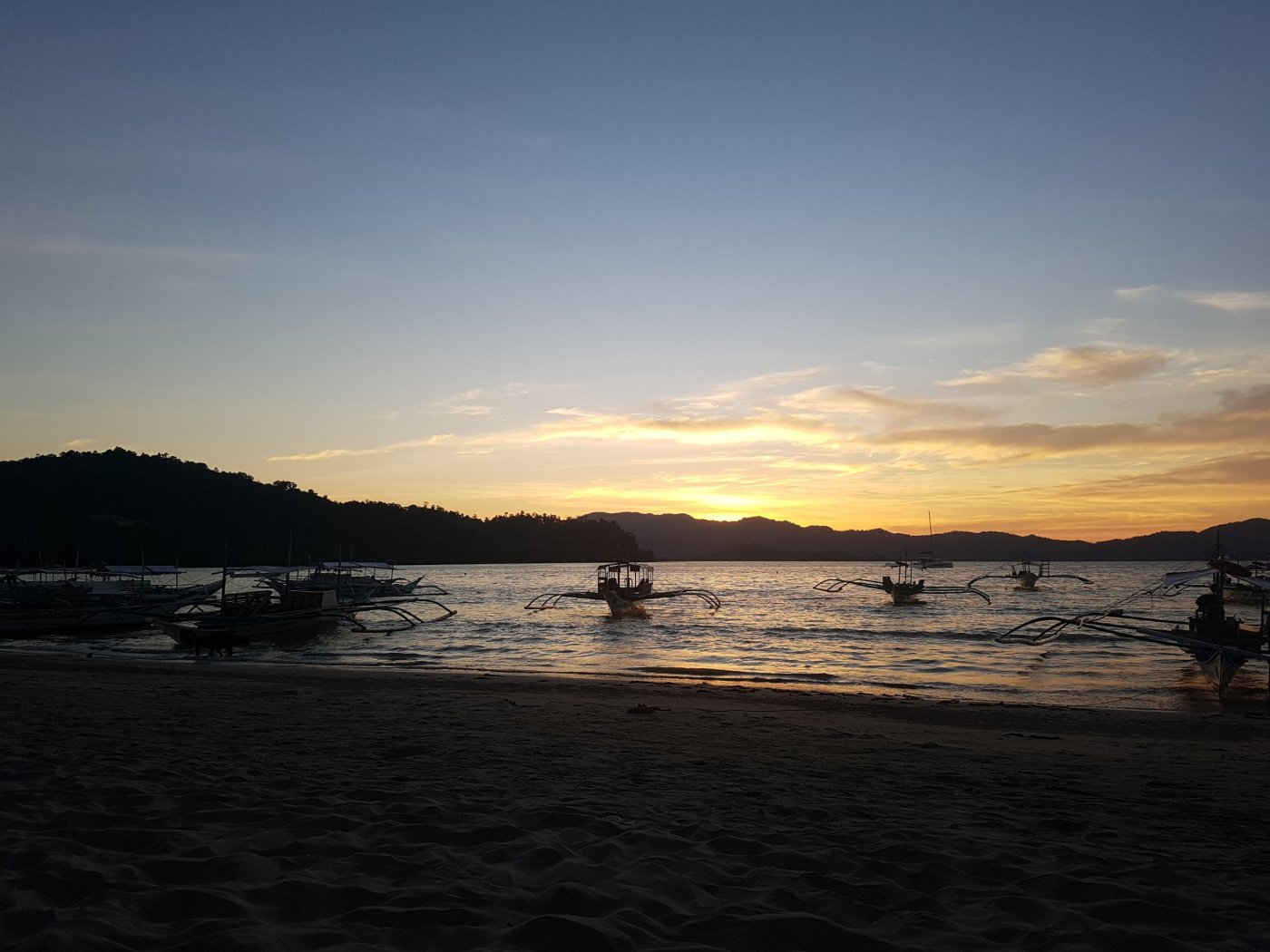 As I originally said at the end of the last blog about El Nido (sorry it was a little while ago, the Philippines is too distracting) I made my way solo to Port Barton on the 10th of March. The journey wasn’t too long but I must admit I was rather sad and a little stressed. Sad because I’d had such an amazing time with everyone for my birthday and to be honest I wished I wasn’t leaving them all. I don’t think it helped I knew they were all still together as well and I was the odd one out. Stressed because for the past few days none of the ATM’s in El Nido had been working and I desperately needed to get money out before arriving in Port Barton as I knew they had no ATM’s for miles. On the drive down the driver of the minivan kindly stopped at several ATM’s en-route but typically none of these worked either. There it was I arrived in Port Barton with 3000 pesos to my name to last me 3 nights (under £50). I only had this money as Zoe so kindly lent it to me, ensuring I didn’t arrive with nothing. After checking into my hostel and paying, in cash. I only now had 1500 peso to last me 3 days, plus I knew a ride out of Port Barton was going to set me back 500 pesos. Not ideal really and I wasn’t 100% sure what I was going to do. Plus, I really needed to do washing but obviously, with money being tight, it looked like this was going to have to be delayed. Alas, however, my money problems were solved. Thanks to the wonders of modern technology and some switched on business Filipino lady I was able to attain some vital peso. My hostel receptionist recommended that I visit a bar called “Happy Bar” where I could transfer the owner money via PayPal and she would give me the peso. I headed off to Happy Bar and luckily this is what I was able to do. In fact, I even used an App called TransferWise, which I highly recommended for transferring money internationally as I used this during my time in Germany. Seeing as I already had it set up, I transferred the lovely lady around £85 and she handed me over 5000 pesos. More than enough to keep me going in Port Barton for a few nights. Now obviously she charged me a little fee, 350 pesos but considering the banks charge 250 anyway and she had massively saved my arse I really wasn’t bothered. So, money situation averted. I chilled and watched the sunset with a beer and had an early night. Somewhat missing everyone but determined to enjoy myself regardless.

The following day I literally did absolutely nothing, and it was bliss. I didn’t get up till around 10 am. Had some breakfast, lied on the beach, read my kindle, ate lunch, swam in the sea. Watched the sunset with another beer. The sunsets in port Barton and quite simply the Philippines, in general, are ridiculous. Had food and went to bed, not really speaking to a soul but enjoying some me time, peace and quiet. 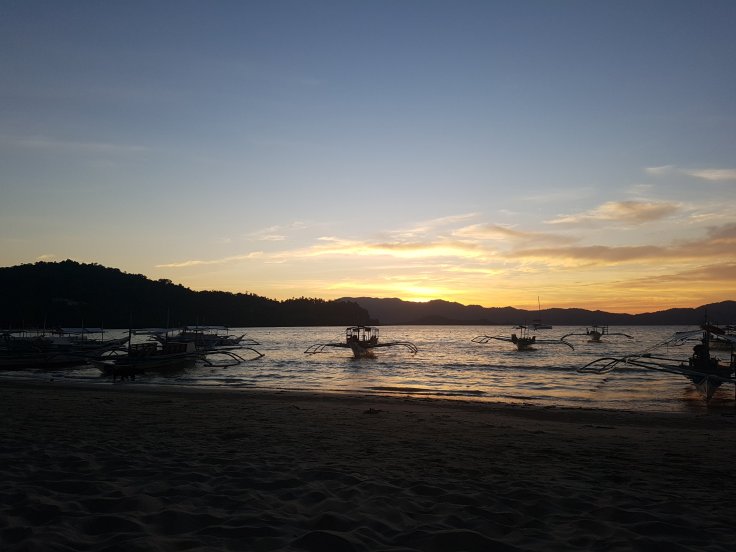 After my chilled-out day, I decided I couldn’t lounge around for a second, although I probably could have and elected to do a little boat tour of the area. Much like the ones we did in Coron and El Nido. I was a bit worried when I rocked up to the boat as it seemed I was the only one under about 35 and the only single person there. Not ideal as I did fancy speaking to someone today. Luckily there was also a very nice Swedish lady on the boat who was the same age as me (although I did accidentally write 22 and not 23 on the sign-up sheet, forgetting I’d just had my birthday) so naturally we became best friends for the day, but will never see her ever again haha or can even remember her name, such is travelling. The tour was nice visiting several nice beaches and a few different snorkel spots. One spot we were lucky to see a turtle, although with a name like Turtle Point it’s kind of expected. But I felt sorry for the thing being chased and harassed by tourists. We also stopped at a place called Starfish Sandbank. No prizes for guessing what you might find here but yes there were several starfish lying around. I also saw on one of the little snorkel stops a little Goby fish and Pistol Shrimp which have a unique symbiotic relationship, whereby the shrimp is almost blind so the Goby keeps a watch while the shrimp cleans its burrow and catches food for the Goby and at night they both sleep in the burrow. It’s very cool to see them living together. However, I was a little concerned towards the end of the tour as during the few times snorkelling my sinuses seemed to get really congested and I had great pain in my forehead whenever I dove down a little way. I was very worried I was getting some kind of cold and considering I wanted to go scuba diving in a few days time I became a little nervous that this might prevent me from doing so. Therefore, on the last few stops, I didn’t really get in the water for fear of making it worse.

That evening I was packing my bag in the hostel room as I had to leave the following morning when two women, checked in and kindly invited me to the bar for a beer. I accepted their kind offer and we grabbed another guy on his own to join us for some food then drinks. One of the girls was from Somerset, the other Canada and the guy also from Canada. We spent the night chatting about travelling and various other stories such as life in Canada and I learnt a lot about the country which I never knew, which was pretty fascinating. Jack the Canadian guy even taught me a cool new card game, which is played solo if ever I’m sad and alone again I can entertain myself. I should also point out that while the 4 of us were sitting chatting, a lovely but also strange little girl approached us all to show us her pet mice, honestly there were about 10-15 of the things in this little basket and she had no problems picking them up and shoving them in our face offering them to us to hold. I politely declined. She was a curious little child, and not a native to the country, apparently living here or travelling the country with her family. It was very odd but that was almost the vibe of Port Barton. It was very relaxed and chilled out but also a little bit hippie too. The closest analogy I can give to those who have been to Pai in Thailand was it came across to me a bit like a Pai on the beach. Overall though it was a lovely place to get away from it all and enjoy some quiet reflection. There are also a few other things of note during my time in Port Barton. Firstly, it gets a little noisy in the middle of the night with cats and dogs going at it at ridiculous hours, there was also the cockerels clucking away, but this occurs everywhere in the country plus some bellends alarm kept going off every 10 minutes at one point and they simply kept snoozing it until I told them to turn the bloody thing off. Other than that, when all this commotion wasn’t going on at night, I slept so close to the sea that you could hear the waves gently lapping at the shore, swiftly followed by a dog bark.

On the 13th of March, I left Port Barton after 3 nights and made my way to Puerto Princesa where I had a flight to Cebu on the 14th. Now the travel time between the two is only 2 hours, although the taxi driver was a nutter and seemed like he wanted to kill everyone, so you need not stay in Puerto Princesa and I wouldn’t recommend it as there isn’t that much to do. Therefore if you can leave directly without spending the night I’d consider it. Although I very much could have done this I didn’t and had the night there. Initially I was a little annoyed as I felt I was wasting a day, but in the end, it proved useful as it allowed me to do some life admin and also start to get my travel plans in order for Indonesia. Once again though I was awoken in the night by the guy in the bunk above me with his alarm going off at a stupid hour. Obviously, it didn’t wake him up only me, so I then had to get up, wake him up and get him to turn it off. He then also proceeded to drop the phone from the top bunk down onto me! Ow the luxury of dormitories!

Up next a quick overnight stop in Cebu city, before moving up to Malapascua for Scuba diving and a reunion with the gang. This blog pretty much marks the halfway point in the Philippines adventure, but stay tuned as the second half is equally as good as the first.

P.s. sorry for the delay, I will get back on track I promise.