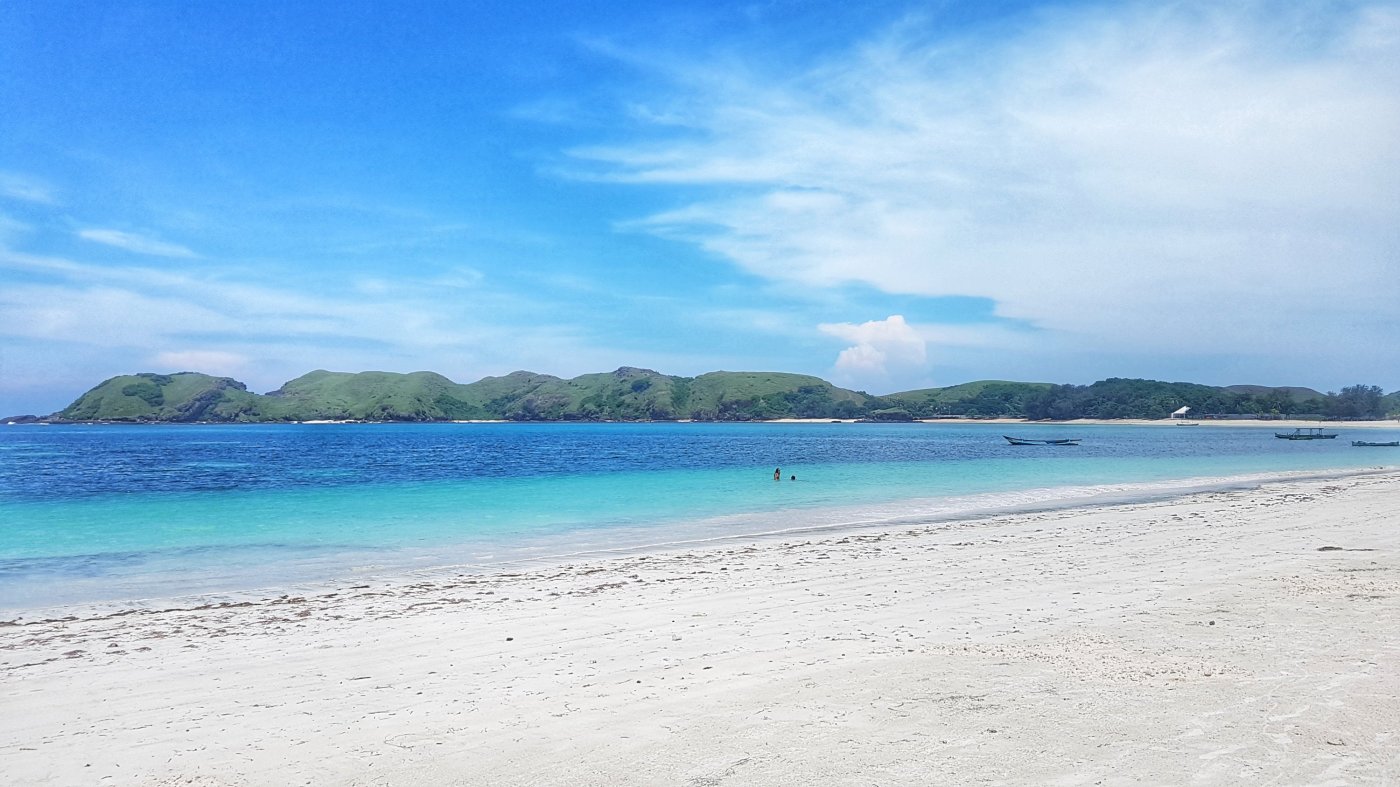 After completing our sunrise hike of Mt. Batur and jumping straight into the waiting minivan which whisked us off to the port. Fred and I boarded the ferry to take us across to Gili Trawangan (Gili T) where we would meet back up with Con and the group he had been travelling with for the last week. Gili T is renowned for its partying, safe to say though Fred and I didn’t feel very much like partying while on the ferry having barely slept the night before and having just completed the hike. The ferry ride from Bali to Gili T took about two hours and we arrived around 3 pm. There wasn’t much of a port on Gili T and the boat just came ashore on the beach. I was still wearing my trainers from the mornings hike so to avoid getting my feet and shoes wet I tried (and failed) to jump from the boat avoiding the sea. As I took my run up and leapt my foot slipped, I came crashing down into the water with a splash, managing to keep my footing, but to large cheers from the local who very much enjoyed my foolish displayed. Fred also had a giggle and I had to laugh at myself although I did feel a bit of a mug haha, I blame the lack of sleep on my poor coordination.

After checking into our hostel and meeting up with the rest of the gang, a great mix of English and Germans we had some food and chilled out around the hostel pool. Most of the group was heading out for another night partying on Gili T but Fred and I were beat and wanted to be fully refreshed for tomorrow seeing as it was Harry’s birthday (a guy in the newly formed group). We, therefore, headed to bed for an early night. While getting into bed I also saw more than I bargained for with the lady in my dorm room. In an unfortunate wardrobe malfunction for her, I got an unwanted view of regions best saved for her future partner!

Moving on, the following day Fred and I were feeling fresh, the same couldn’t be said for some of the group who had gone out the night before. After a slow start to the morning, we rallied, headed for some lunch before starting the celebrations for Harry’s birthday. This consisted of hitting a few bars before heading over to the beach to watch a magical sunset. The colours were so vivid over the sea and the clouds made for a mesmerising experience. Where the tied was also retreating little rock, pools had formed which were teaming with life, especially crabs and little starfish type characters. It really was a spectacular scene, one I didn’t capture a photo of, which I’m not disappointed about. It was great to be so caught up in the moment enjoying the amazing view with great company and not worrying about getting my phone out every 5 minutes to take a photo. After the sunset, we headed back to get changed before eating pizza in a nearby restaurant, where we all died from the heat. They finally set up a fan as we were leaving.

After food, we made our way to “my mate’s place” (great hostel name) which is where people head for pre-drinks before heading out. We had a few shots and stuff here before making our way out with everyone else from My Mates Places to join the party in Gili T. The first stop was a bar/club called jungle, the biggest attraction here being the AC inside which was very much welcomed. After a few more shots and drinks in Jungle, we then headed to another bar. I think it was called Jiggi bar or something like that where we stayed until around 2 am before heading back to our hostel. Unfortunately, in Jiggi bar my flip flops broke (they were on the way out after Connor had initially broken them a week or so earlier), this, therefore, meant I had to walk back barefoot. Although it isn’t the worse place to have no shoes seeing as the island doesn’t have any cars, just bikes and horse-drawn carriages and all the roads are made of sand.

In the morning everyone awoke a little gingerly especially Harry, but he said he had a very good birthday. We even managed to keep hold of the beer cooler which I accidentally took from our hostel. Transferring it from person to person for the whole night while out. I didn’t think it would make it back but after the early scare that it didn’t survive the night, Harry emerged from his room beer cooler in hand plus half-finished beer, (no longer cold). That day most of the group we had been with on Gili T were moving on, the majority to Lombok and a few back to Bali. Fred Con and I opted to stay one more day on Gili T to explore a little before we moved to meet back up with everyone on Lombok the next day. The first stop of the day was a place called turtle point, which no prices for guessing is known for its turtle sightings. We hired the required snorkelling gear and headed out into the water, having already spotted a turtle from the beach. Turtle point lived up to its name and we saw several turtles while in the water. Which was very clear but also had a very strong current too. At one point we were also surrounded by a shoal of blue fish which came whooshing past us out of nowhere. After some time, snorkelling and relaxing on the beach we then hired some push bikes (as I said no motorised transport on the island which is lovely) to cycle around and explore. There is basically a road that runs around the perimeter of the whole island, save a few patches where you must get off and push the bike through the sand. The bike trip around the island was lovely and it was nice to see some different and more relaxing aspects of Gili T asides from just the partying. We finished our bike ride by once again watching the sunset over the sea before heading back to the hostel for an early night.

After our day exploring Gili T, we left and headed to Kuta beach on Lombok to reunite with those that had left us the day prior. The Ferry ride over and taxi journey went smoothly but involved the usual waiting around that we have come to expect while travelling Asia. We weren’t staying in the same place as our new friends however as it was full, but we were only down the road. We elected to get some scooters and headed for lunch. I also went shopping for a new pair of flip flops, managed to buy myself a pair of genuine fake Nikes for £5. Bargain.  We didn’t really get up to that much during our two-night stay here. Our hostel had a lovely pool, so we just spent our time relaxing here and heading out to eat with the guys from the other hostel. It wasn’t until our final morning when we went on a little scooter ride to the nearby Pantai Tanjung Aan beach that we really saw something worth seeing. We didn’t spend any time on the beach though as we were leaving at 1 pm to head to Senggigi. It’s a little disappointing we didn’t explore a little bit more of this area as I think there are some lovely beaches to be discovered.

In Senggigi, we had also booked ourselves our own private villa seeing as there were 8 of us now travelling together. I had originally planned to make my way over to an Island called Nusa Penida which looks stunning but, in the end, decided to stay with the group and head to Senggigi. The reasons being I was flying from Lombok in a few days’ time anyway, and the expense and time taken to travel to Nusa Penida and back just didn’t warrant the reward. I shall just have to return someday. The Villa, however, was plush, and it was great to have a little bit of luxury, particularly the showers which were so nice and hot. We even had our own kitchen but didn’t really use it as it was still cheaper to eat out. Plus, it was very hard to find a suitable supermarket nearby with necessary ingredients. There were mainly convenience stores which stocked your basic fast food type options. We ended up staying 3 nights in the Vila and once again didn’t do very much, mainly relaxing by the pool. One day we did take some scooters out to explore some nearby beaches and although they were nice to look at and the drive fun, they weren’t really beaches for relaxing on. There wasn’t too much sand plus as soon as you entered the water it became very rocky. As I said then we spent most of the time at the villa, but that’s what paying for our own villa is for I guess. Some of us spent one evening watching the football on my laptop and then the following morning even managed to watch the new season of Game of Thrones which most of us were very excited about. Thankfully the Wi-Fi was strong enough for us to watch it.

On the 16th of April after 3 nights in the villa, we all left. I headed off in a separate direction to the rest of the group however. This is because I had booked a flight from Lombok to Labuan Bajo, the main point of entry to explore Komodo National park. Famous for its Komodo dragons and outstanding scuba diving. The rest of the gang including Fred and Con travelled to Nusa Penida. I shall be reunited with Fred and Con on the 23rd of April when I fly back to Bali, before the 3 of us fly to Cairns, Australia on the 24th of April, thus ending our 6 months in Southeast Asia. For my last week then I have time explore Labuan Bajo as well as spending 3 days living on a boat scuba diving and exploring Komodo national park. Not a bad way to spend my final week. I shall update you all with my final blog from this amazing adventure next week! (Fear not it won’t be the last ever blog)