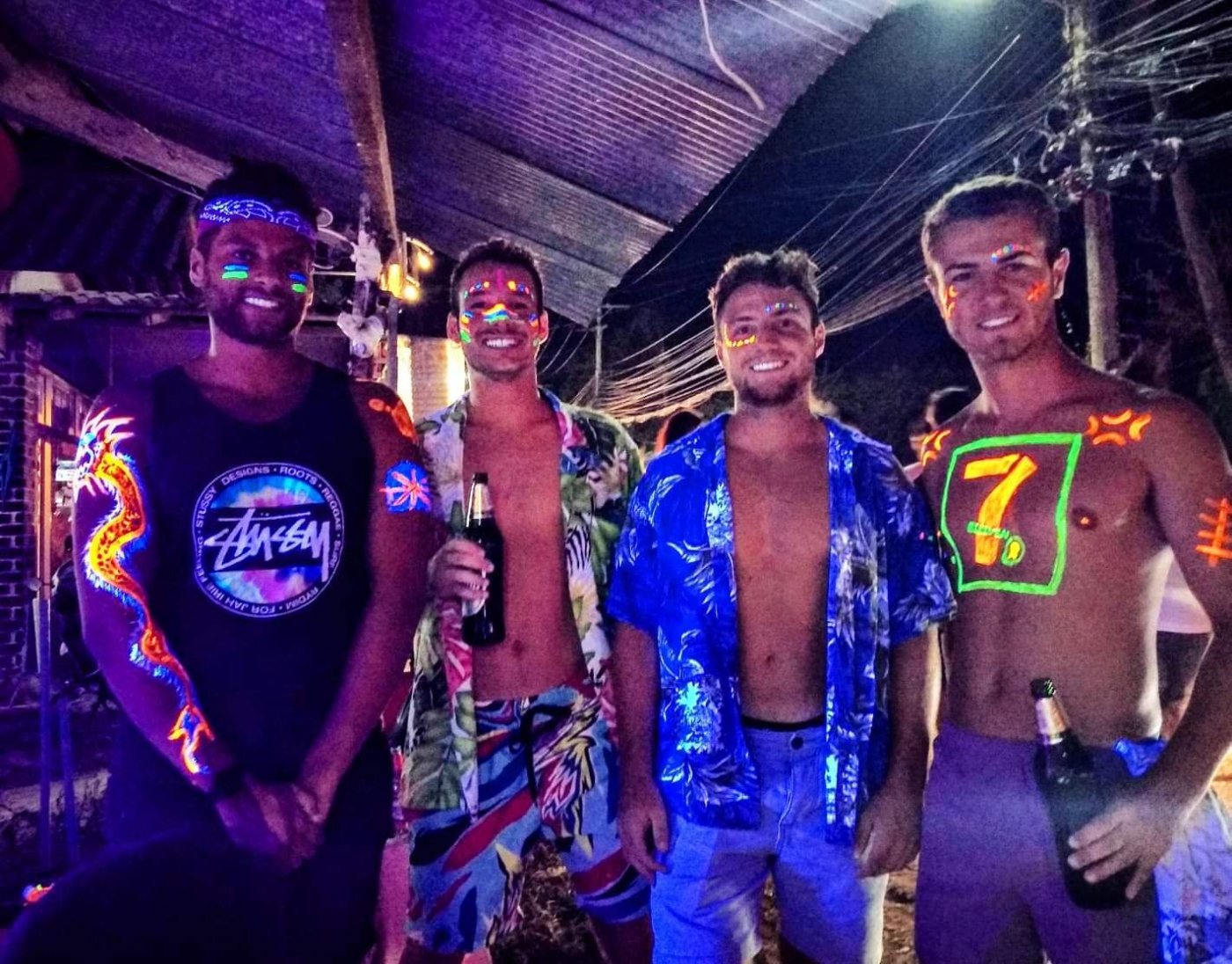 After an amazing week on Koh Tao learning to dive and spending time on my favourite Thai island to date, we transferred to Koh Pha Ngan on 20th of Feb. This also happened to be the day of the famous full moon party. When we arrived on the island we checked into our hostel and then simply spent the day chilling out and preparing for the night ahead. This involved Ollie buying an outfit, eating food and napping for most of the afternoon as we knew we wouldn’t be getting much sleep that night. I think it’s safe to say we also all had pre-night out nerves as we really didn’t know what to expect, other than the fact it was going to be a very big night out!

We were staying pretty far away from the full moon party which was about a 30-minute taxi ride. We got in the taxi around 11 pm and arrived at Haad Rin beach around 11:30 pm. Already the atmosphere was crazy before even getting on the beach itself. Before making our way onto the beach we first had a few beers while painting ourselves in fluorescent paint. Connor and I got help from a “professional” just a local who charges to paint the party goers, but he was very good. Fred and Ollie decided to pay less and just use the paint on themselves. Once we were suitably painted, we then made our way onto the beach. There was an entrance fee of 100 Baht, which supposedly goes towards cleaning up the beach and stuff, but who knows. You do also get a bracelet as a bit of a memento, which I subsequently lost anyway! As we arrived on the beach we were greeted with a sight of around 10-15 thousand people stretched out along the beach partying and dancing in the many bars that lined it. We arranged a meeting point should we get separated during the night and agreed that on the hour if people were split up we would reconvene here. Luckily however we didn’t have to use this as we did all stay together for the night which was a little surprising. I guess one reason for this was the fact that there wasn’t one central area where everyone congregated. Everyone was very much spread out over the countless bars that lined the back of the beach. This meant there were little pockets of people not one whole mass as would have been the case if there was one big main stage/arena. Although I think this may have been better. What this did mean though was that we basically flicked from one bar to the next either when we grew tired of the music and wanted a change, or if we wanted to get a drink, which considering the monopoly on the market were very reasonably priced. Fred and I just stuck to beer and stayed away from the notorious buckets. I was glad I did so when Ollie had to run to the sea to be sick after finishing his off. This occurred very early in the night I must say around 00:30. But being the sport that he is he very much powered on through. The sea was very much the toilet of the beach, countless people at any one time would either be weeing and most probably being sick in the sea, as Connor later was. Another victim of the buckets! Luckily for us lads, it was pretty easy to wee on the edge of the beach into the water. For females, it wasn’t so easy, yet many attempted the feat none the less. We were kind enough to help one such group of girls and shield their dignity with our shirts while looking the other way. Additionally, many people would, in fact, walk past people without even realising they were directly in the path of someone going to the toilet. Now to most of the people likely to read this, I’m sure this paints a rather horrible picture of what the full moon party was like. Now I must admit none of us really saw what all the fuss about and I doubt we would rush back but overall it was still a very cool experience to party on the beach with such a large group of people under the massive full moon. The music was good, people were friendly, and everyone was just out to have a good time which is the way it should be. Plus, I guess it’s just another something ticked off the bucket list. We ended up leaving the party around 5 am and getting in at like 5.30! Although the music did supposedly go on till 7 am when everything finally died down.

The following day was very much a write-off, doing sweet nothing the whole day other than eating food or going to the shops for supplies. We did eat our evening meal in the Mason Arms, which is an English style pub on the island serving home comforts! The boys had roast dinners, which by home standards were poor, but out here and on a slight hangover were very good. I had a minced beef and onion pie which was also nice. After the pub (where no one order alcohol) we all went home and ended up in bed around 8/9 pm.

The following day we then transferred to Koh Samui (22nd of Feb), unfortunately, this did mean we really didn’t explore Koh Pha Ngan at all other than going to the full moon party and people do say that there are lots of things to see and do there. The island did look nice and I’m sure it’s well worth a visit outside of full moon party times. But after spending so long on Koh Tao which was truly stunning I for one wasn’t too bothered about moving on. Our transfer to Koh Samui was uneventful other than the fact Ollie got a little annoyed at us all in the morning. This was due to us leaving him to walk to the ferry on his own. Which was only 10 minutes away. He decided he wanted some food while the rest of us weren’t interested and wanted to get the ferry. There was a slight break down in communication, whereby Ollie was only getting take away. But on his arrival to the ferry pier, he wasn’t happy and took his frustration out on Fred and me which we were a little bemused about whilst trying to hide our laughter. We shall blame it on you being tired Ollie, regardless that evening we were all joking about Ollie’s hissy fit.

Once checked into our hostel on Koh Samui, which was a good 45-minute taxi ride from the ferry pier we once again really didn’t do a lot other than chilled around the pool for 3 days, watch footy and eat Indian food. The hostel itself had its own pool so we spent our time here relaxing and fully getting over the Full Moon Party. Fred managed to go to the gym and Ollie managed to break one of the 5 only sunbeds! We ate out at two different Indian restaurants for our evening meals and watched some of the football, Spur v Burnley one night and Manchester United v Liverpool the next. During the United game I was very much outnumbered and one of the only United fans in the bar. We had front row seats of the big screen and when United scored I didn’t hold back in my celebration. About 3 seconds later I was sitting back down in my chair as the goal had been ruled offside, to which the whole of the bar then gave me a cheer. Fred had a laugh at my expense and I laughed with him. Luckily the score remained 0-0 to save me from further embracement, but as we left the bar a lady couldn’t resist making a comment saying “sorry” in a condescending tone. I just walked on past and once again had a laugh with Fred about it.

The biggest thing that occurred while on Koh Samui was that we said our goodbyes to Ollie for a little while, who left Koh Samui on the 24th to travel back to Phuket where he would be flying to India on the 26th of Feb. It is now very likely that we won’t see him again until we reunited in Aus due to Ollie’s schedule being about 5-6 weeks behind us. I’d just like to say mate all the best for your solo travels, I hope you have a blast and don’t miss us too much. I’m sure you won’t, just like we won’t miss you! Regardless thanks for the countless memories that we all made the last 4 months, undoubtedly, we shall look back on them fondly in the years to come. Shred some waves in Sri Lanka, eat your weight’s worth in Curry in India and see you in Aus mate!

Overall, I think we were all a little underwhelmed by the Thai islands, but maybe that’s because we expected so much due to all the good things you do hear. For me, it was too much a holiday destination and resorts as opposed to a backpacker traveller destination which we have very much gotten used to and loved. It all just seemed a little too touristy which is likely why for us it lost some of its appeal. By no means did we have a bad time here and there were certainly highlights such as the scuba diving on Koh Tao and the Phi Phi islands. However, I think we are all in agreement when I say we enjoyed northern Thailand more than the south. Regardless thanks again Thailand, now let’s see what the Philippines has to offer.