On the 27th of Feb Fred, Con and I flew from Bangkok to Manila in the Philippines. The flight took around 3 hours and was as uneventful as a flight should be. Although Fred was a little disappointed as he was the only one who didn’t get an inflight meal. Although to be honest he didn’t miss out on much. We landed in Manila and made our way through passport control with no trouble. We had heard that the authorities would want to see proof of onward travel so was prepared for this but in the end, no one asked. The hostel in Manila was about a 30-minute taxi ride away, but it’s safe to say that this would have been shorter if the traffic in the city wasn’t so bad. Even the taxi driver said the traffic here is the worst in the world. Now I haven’t been to every city in the world (although I’ve done a couple) but I can confirm the traffic was terrible. It wasn’t as crazy as Vietnam, but at least there it seemed to move. In Manila, it took ages even for the shortest of journeys. We arrived at our hostel called Ola, however, it was more of a building site than a hostel. Other than the reception, the rooftop bar and the floor we were staying on the hostel was either still being built or being renovated and every morning at 8 am we would be awoken to the builders starting their days work. Not Ideal. Additionally, every building surrounding the hostel also seemed to be undergoing construction, so not only did the building work in the hostel wake us up early. The welding occurring opposite would go on until the very early hours of the morning. I should also mention that in Manila we met up again with the aforementioned “Manchester Girls”, who we first met in Chiang Mai, before crossing paths again in Laos and Cambodia. Although they were a girl down due to one of them heading home for a month or so. We would end up travelling with the two girls from Manchester, Zoe and Jade for the next 10 days in the Philippines. Replacing Ollie with two females wasn’t a bad trade I don’t think.

That evening we headed out for some food at a really nice Mexican place that the girls had found earlier in the day. The food was good and a great price, so we would end up eating there several more times while in Manila. After having our dinner, we then headed to a bar for a few drinks. Not long after sitting down, we were invited to join a larger group of guys at another table. Now the 3 of us weren’t too bothered about going to join the group of Filipino’s, Zoe and Jade weren’t too keen as they thought they would just be hit on. In the end, it turned out that the vast majority of the guys were gay, and it was, in fact, Con, Fred and I who would be getting hit on haha. We also ended up playing a game of beer pong against 3 of the gay guys. Unfortunately for us, we lost the game, no thanks to Con and Fred who only made 3 cups collectively were as I made 5. There was a forfeit for the losers which luckily for us only involved buying them a drink and nothing more. I should add while we were losing at beer pong, some of the guys in the group who weren’t gay took the opportunity to flirt with Zoe and Jade so in the end we all got hit on by Filipino people that night haha. Overall though they were all nice people and it was reassuring to see this side of the Philippine people as online you read a lot about the crime and stuff in the country which we didn’t witness at all. After a few drinks with our new friends, we then went back to the hostel to get some sleep. 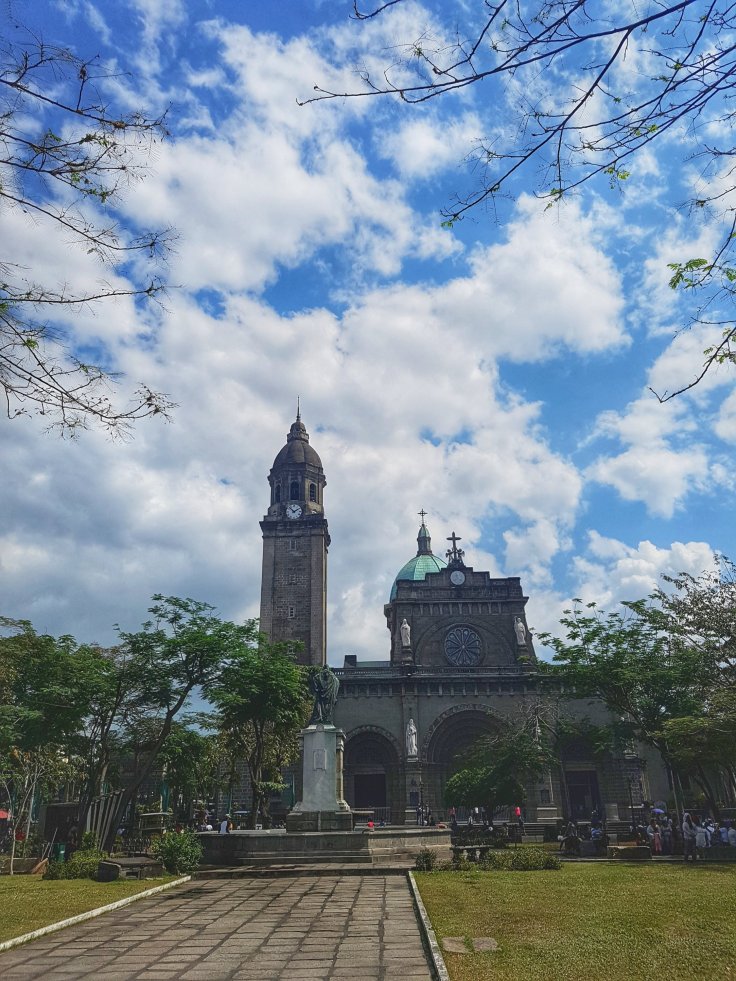 On the 28th we explored a little bit of Manila. Firstly, we headed to a big shopping centre, like the one in Bangkok as Fred still wanted to buy some swimming shorts and the girls needed a few bits too. Once we had done this we then walked to a nearby park, where we got shouted at by some lady who appeared passed out on a bench. After this, we walked to the part of the city called Intramuros, which is the old quarter of the town. The walk was rather long, and it was very hot so by the time we arrived at this area in the city we were all a bit worn out and couldn’t really be bothered to do much. We did explore a little bit and see the old church and fort but all it all it really wasn’t that great. After exploring for a little while we took a taxi back to the hostel which took ages due to the awful traffic.

In the evening we headed to a different part of the city to go to a rooftop bar. Before this though we had some food at a nearby street food place. The food court had about 10 little vendors selling food such as chicken wings, Turkish food and ice cream. The food was really good and I stuffed my face with wings and Turkish food. After being suitably filled we then headed up to the rooftop bar which was actually the top of a hostel called Z hostel. The view from the bar was really cool but the bar itself was a little small and crowded, although we did manage to find a little spot to chill out and chat/catch up with Zoe and Jade while drinking some beers. It wasn’t a late one though and after the drinks, we headed back to the hostel.

On the 1st of March, we were leaving Manila to travel by ferry overnight to Coron. The ferry wasn’t departing until 7 pm though but we were advised to arrive at the port 4 hours before. We, therefore, chilled out at our hostel’s own rooftop bar in the morning before taking a taxi to the ferry port. We arrived at the port around 4 pm. Connor also very nearly left his new phone in the taxi as well, but luckily realised before the driver had left. We didn’t really need to be at the port so early as it only took around 30 minutes to an hour to sort everything out and we were then on the boat around 5 pm. Two hours before it departed so we just chilled out at the restaurant on board. As the ferry ride was overnight we would all be sleeping in cabins on the boat, however, had all booked different classes. I booked the tourist class which was about £25 and consisted of around 10 bunk beds in the one room but was overall fine for the night other than the fact the light was on all night. Jade and Zoe had booked a cheaper class which I think came in around £15 and was overall very similar to mine, just with more people in it. They did say it got very cold at night too. Fred and Con had booked the cheapest class where there were around 200 bunk beds in one massive room. Well if you could call it a room as it was basically the deck of the large boat with a roof but was open at the sides to the elements haha. They quickly decided it wasn’t for them and were able to get an upgrade to a similar standard room to the girls. But overall the overnight ferry ride wasn’t terrible but wasn’t that great either. We, therefore, arrived in Coron, on the 1st of March where we would be spending the next 4 days. More on what we got up to in Coron in the next blog.